Henry Carney had five surviving sons and two daughters. One daughter Christine was my grandmother)
The sons (and possibly daughters too) were educated at the Royal Hibernian Military School Dublin http://achart.ca/articles/hibernian/index.html

Following in their father's footsteps, the five brothers joined the East Yorkshire Regiment

Four of the brothers saw action during the Boer War, five of them served during the Great War 1914-1918

One of the brothers died at home during the Great War period. He had been seriously wounded at Ypres in 1915

The five brothers between them had 26 medals: 1 MC, 3 DCM, and 22 other medals
This is their story: 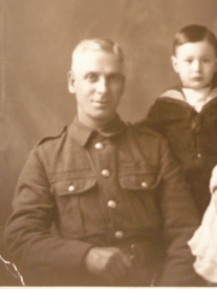 Edmund Carney the eldest son, enlisted in 1891, after passing 18 yrs in the service was discharged to pension. During the Boer War he went on service with the 3rd Battalion. He recieved the Queen's medal with 3 Clasps. On the outbreak of The Great War he re-enlisted into the 6th Battalion (Pioneers) and went with it to Gallipoli. For his services he received the 1914 & 1915 star, the British War medal and the Victory Medal.
He was also awarded the Long Service and Good Conduct medal Snapper 1927

The second son William Michael Carney enlisted in 1894, and was discharged to pension in 1920, When the 2nd Battalion mobilised for the Boer War he joined the 5th Mounted Infantry at Aldershot, for his services for that campaign he received the Queen's Medal with 4 clasps and the King's medal with 2 clasps. During the Great War he was with the 3rd Battalion. He was also awarded the medal for Long Service and Good Conduct. Snapper 1927

From his pension record Service no. 4607 Michael William Carney, born Beverley, attested January 1894 into the East Yorkshire
regiment at Beverley aged 14 and a half. (pension record has him briefly in the 2nd Bn Kin's Liverpool Regiment 17.1.94, transferred to East Yorks Regt. 13.4.94)

(3rd (Reserve) Battalion
August 1914 : in Beverley. A training unit, it remained in UK throughout the war. Moved within a few days of declaration of war to Hedon, for duty as the Humber Garrison. Made the short journey in April 1916 to Withernsea. Source: The Long Long Trail website ) 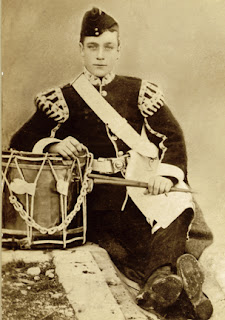 The third son John Carney 5083 enlisted in 1895 Appointed paid Lance Sergant 5 Mar 1914... he was a good football player and had the nickname Mick (reference on him joining the Sgts mess) Kamptee India (Snapper Aug/Sep 1914) . Served in the 2nd Battalion in the Boer War, and received the Queen's Medal with 3 clasps and the King's Medal with 2 clasps. During the Great War he served with the 2nd Battalion. In 1915 he lost his right eye at Ypres. For that action he was awarded the DCM. The Snapper 1927
From the London Gazette: 5082 Sgt J. Carney DCM 26.7.17
"For conspicuous gallantry and devotion to duty. He was largely responsible for silencing the enemy's snipers, and through- out set a magnificent example to those around him."
John Carney was discharged to pension in 1915 with the rank of Sergeant, unfit for further service. After his discharge he lived with his sister, my grandmother at Keats st Liverpool and worked for a time as a Commisionaire at Bootle Picture Palace. He died in January 1918 of TB he had contracted in the trenches and general ill health resulting from his wounds. He is buried at Ford Cemetery Liverpool His death cert states "Pneumonia and Cardiac failure" Perhaps a victim of the Spanish Flu pandemic that killed an estimated estimate of 50 million people, 3% of the world's population
He is not on CWGC, or any war memorial.
On his Medal Index Card from the NA Hewas given a Silver War Badge - qualifying date 15 1 15 Also for the Long Service and Good Conduct medal 'Deceased - Brother applies' 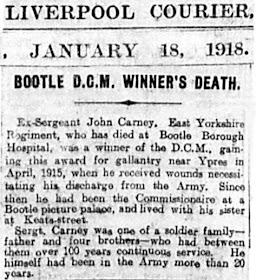 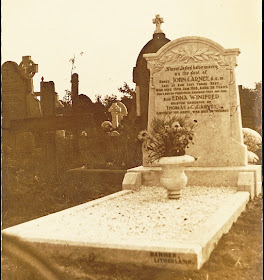 
The fourth son Thomas P Carney 5748, enlisted in 1898, he served with the 2nd Battalion during it's early service in the Boer War for which he was awarded the Queen's Medal with 5 clasps, and later the DCM as a drummer boy. Drummer T. Carney 5748 granted 2nd Good Conduct Badge 17.12.1904 (Snapper July 1906) Drm Carney C Company Marksman (Snapper Aug 1906). He was also mentioned in Lord Robert's final despatches as having rendered special and meritorious services 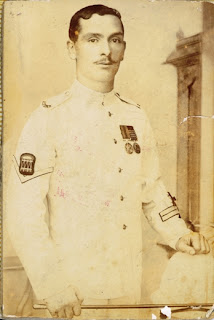 During the Great War he was with the 2nd Battalion in France as a Sergeant, service number 5748 later CSM. Invalided home he was sent to join the 12th Battalion. With that Battalion he served in Egypt, later returning to France. When the 12th Battalion disbanded he joined the 1st Battalion. For his services in the Great War he received the MC, bar to DCM, the 1914 & 15 star, the British War medal and the Victory Medal. In 1919 he was the acting RSM. He married Sarah Agnes Watts, eldest daughter of William Watts of Hull on the 10th of May 1919 in St Mary's Wilton st Hull. In 1953 he was awarded the MSM as RSM.
From the London Gazette: 5748 CSM T.P. Carney. bar to DCM 3.10.18
"For conspicuous gallantry and devotion to duty in action. During an attack he was constantly along the line assisting and encouraging his men, on one occasion standing upon the parapets and shooting at parties of the enemy advancing in the open. Later he organised a bombing party and cleared out the enemy, who had gained a footing in our trenches. At all times he has shown great courage and a fine soldierly spirit." Military Cross 1 Jan. 1919 (New Year Honour) as CSM 1st Bn. East Yorks Regt. However, note: "Birthday Honour, but in fact for gallantry in holding a bridgehead following an attack on Le Sars, Butte de Warlencourt and Eaucourt L'Abbaye and the crossing of the Ancre. The bridgehead was held for 15 hours before being relieved."
Meritorious Service Medal awarded 1953.
His medals:
MC, DCM and bar, QSA (clasps Cape Colony, Wittebergen, Transvaal, SA 1901, SA 1902), 1914/15 star trio, Defence Medal, LSGC (GV), MSM (GVI). (from 'The Snapper' 1925) From an article in the "Snapper" (my own copy) May 1919
"On 4th May Major Riall presented the Distinguished Conduct Medal and Military Medal respectively to: Company Sergt. Major Woodruffe and Pte Hollows after church parade. Another presentation was made after church parade on 11th May to Sergt. Major F Stringer. In prsenting him with the Meritorious Service Medal Major Riall in a brief speech stated how glad he was to have the honour of presenting this medal to Sgt Major Stringer, whose family had been associated with the regiment for so many years and that he (Major Riall) had served with his father and two brothers. He further remarked that he always considered that one of the great things about the Yorkshire Regiment was the number of families who had fathers and sons serving in the regiment, and he especially mentioned the Stringers, Carneys, McKennas and Kilpatricks as some who came to mind at the moment...On 30th May Major Riall presented Company Sergt. Major T Carney M.C., D.C.M with the bar to the Distinguished Conduct medal and the medal for Long Service and good conduct.
He remarked that Sergeant Major Carney belonged to one of the "Regimental families" to which he referred to when presenting Sergt. Major Stringer with the Meritorious Service Medal that month but he had no idea when he mentioned his name on that occasion that he was to have the honour of presenting him with two decorations which he now did with very great pleasure, having known Sergeant Major Carney as a boy when he joined the 2nd Battalion in Ireland over twenty years ago" 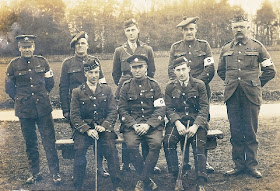 Thomas Carney is in the middle of the front row:
Possibly taken in 1919 in France at the time he was awarded his Military Cross. He was an acting RSM at the time

Thomas Carney:
Possibly taken in 1953 when awarded the MSM

The fifth son Frederick Carney 6971( F Company 2nd East Yorkshire Regiment Kamptee India.  Snapper Oct 1914) Enlisted in 1902 and was discharged to pension in 1924. During the Great War he served with the 2nd Battalion, 6th Battalion and 10th Battalion. For his services he received the 1914 & 1915 star, the British War medal and the Victory medal. In the campaign of 1919-20 in the Middle East he received the medal with clasp 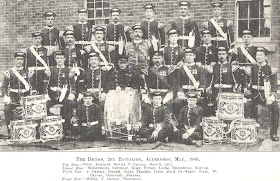 Drum band photo taken in Aldershot 1903: The band members in the photo above are: Stein, England, Hewitt, T Carney, Merrill, Catt, McReynolds, Gardiner, Riley, Potten, Locke, Humphries, Gosling, J Carney, Cornell, Corpl Thacker, Lieut Boyd Dr-Major Clare, W Carney, Conreuth, Pearson, Molloy, F Carney, Thompson. No first names given. Only the 4 Carney brothers are identified by their initials
From a brief search of CWG database - and it's harder without initials, it does look as if many of the EYR band did not survive WW1 (Photo from The Snapper, generously donated by "Joseph" (Charles) from the Great War Forum)

During World War I, The East Yorkshire Regiment (Duke of York's Own) raised a total of 19 battalions from its pre-war establishment of two regular, one reserve and three territorial battalions. The regiment gained 58 battle honours and four of its members were awarded the Victoria Cross during the conflict. The East Yorkshire Regiment lost a total of 7,460 casualties during the Great War. 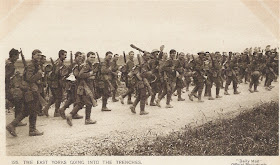 The 2nd Battalion, The East Yorkshire Regiment was based at Kamptee in India on the outbreak of war on 4 Aug 1914. It embarked for the UK and landed in England in Dec 1914 when it moved to Hursley Park, near Winchester. There it was assigned to the 83rd Brigade in the 28th Division. On 16 Jan 1915 the battalion embarked for France and Flanders, landing at Le Havre. In Oct the formations were redeployed to the Macedonian front, embarking from Marseilles on 28 Oct 1915 and arriving at Alexandria on 28 Nov. On 3 Dec it left Alexandria and landed at Salonika (Thessalonika). The 2nd Battalion ended the war in the same formations on 30 Sep 1918, north of Lake Doiran, Macedonia. {Source: British Regiments, 1914-1919; Brigadier E A James; }

Until fairly recently just photos in an album. That's all I knew about them. Various stories about the lads from older family members were 'They liked a drink', 'rowdy lot, always getting promoted and demoted' 'they came home on leave, had a few too many and danced in the streets' upsetting my grandmother, their sister
A forgotten generation, like so many other brave soldiers who fought in the Great War. No longer Forgotten

(This not a family history blog. It is the military history of a branch of my family. I'll be adding random stuff about the East Yorkshire regiment including war diary entries, maps, photos, history, postcards and anything else that I have and find)